Recently, a veteran who specialized in the art of ganking shared his current build for Galahad in Albion Online site. Ganking is a special kind of PvP which referring to surprise attacks in the open world.

He started building granking with his Benedict guild in Galahad by building The Double Bladed Staff Assassin. This build was created for solo ganks or ganks on small groups. It is not designed for hero plays or a fair battle! There are some suggestions worth to apply for solo PvP play.

"This build's extremely high mobility combined with great crowd control abilities not only allow for easy solo attacks on single targets or small groups but also render you nearly unkillable in case you have to outrun your victim's reinforcement or a suddenly appearing zerg," Veton states. "Even mounted players are not able to escape this build, which makes it the perfect gathering build for people that don’t like to gather themselves." 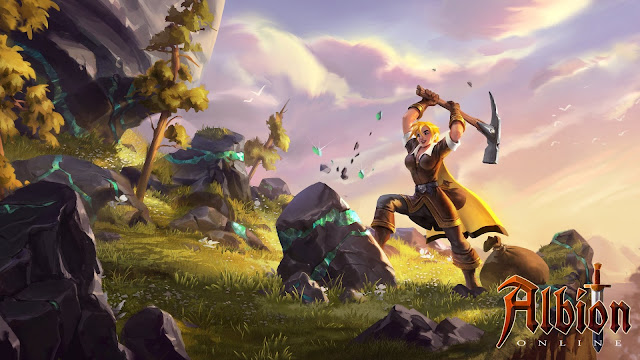 It should be noted that the Double Bladed Staff Assassin cannot compete once a group skirmish starts because of its high specialization for short fights and its reliance on a surprise effect to catch people of guard. If you prefer team fights over solo ganking, Veton recommended to use a different build. In addition, instead of most other scouting and pure mobility builds, the huge amount of crowd control abilities is more useful in a team fight.

The Double Bladed Staff combines crowd control and mobility in a single weapon and both are extremely important for any of your ganks. Two out of three active abilities can stun your target while the last is a huge gap closer combined with a very potent slow. The passive adds in another possible stun. Combined with your Mage Cowl, these skills allow you to easily dismount your victim from any mount except an Armored Horse.

Concussive Blow - Deal damage to your target, and slow them slightly for a few seconds. This effect stacks up, and after collecting the third stack you will stun the target while consuming all charges.

Stun Run - Increases your movement speed for a short time and your next auto attack will stun your enemy. Never use a stun while your target is still stunned and count your auto hits to know when your next passive stun will trigger.

Overpower - Charges toward an area, dealing damage to all enemies in a 5m radius on impact. Damaged enemies will also be slowed.

Passive: Stunning Strike - Every five normal attacks, your attack stuns your target. Your Bladed Staff's passive provides you with a free stun every few auto hits so make sure you do not only use your skills but weave in auto attacks as well. 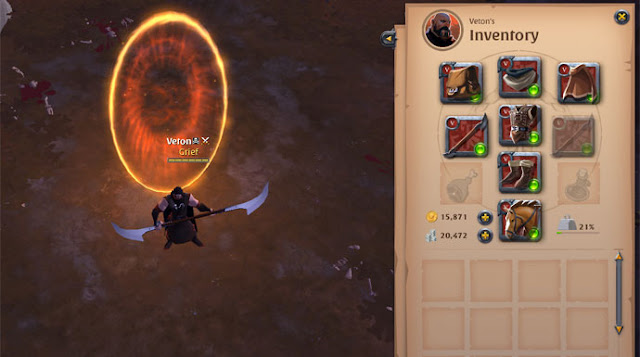 Poison - Your next auto attack will poison your target, damaging them over the next few seconds.

Using Stun Run instead of Empowered Slam or Heavy Cleave reduces your overall damage output in favor of crowd control. This is where the Mage Cowl comes in, as it increases your burst damage greatly at the cost of nothing, leaving more energy for your Double Bladed Staff.

Ambush - Turn invisible for a short period of time. Your first attack out of invisibility will deal increased damage, the longer you stay invisible the higher the damage buff. Attacking or casting breaks the invisibility. You will also become visible if you move too far away from the activation spot. Ambush is your life insurance when fighting against multiple targets or an attack doesn’t turn out as planned. Use it to dodge abilities in the middle of a fight or hide from unexpected reinforcements while you wait for your mobility skills to go off cooldown.

Passive: Quick Thinker (Tier 5+) - Reduces all cooldown times. Quick Thinker as passive makes sure that your mobility and crowd control abilities are up as often as possible.

Run - Greatly increases your movement speed for 10 seconds. Run provides you with an extremely long movement speed boost that does not break when using abilities. Combined with the slow of Overpower you can throw every skill you have at your running target, mounted or on foot.

Passive: Quick Thinker (Tier 6+) - Reduces all cooldown times. In order to ensure your cooldowns being as short as possible, Quick Thinker is picked as a passive here as well. 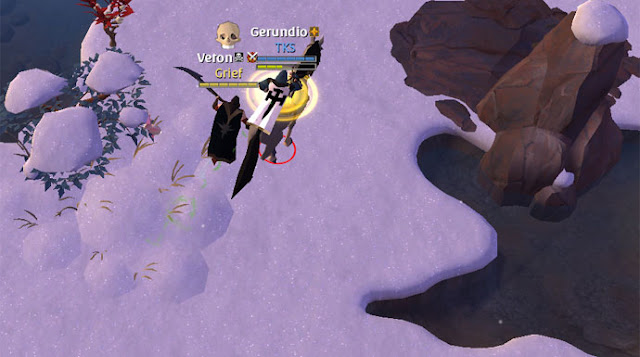 Omelette - Increases your casting speed and your cooldown reduction. The more cooldown reduction you have, the more often you can use your mobility and crowd control abilities and the more successful ganks you will have. Following that simple logic, picking Omelette as your food to go is a no-brainer.

Major Healing Potion - Regenerates a percentage of your total health over time. As most of your fights will be solo and the build does not feature a healing skill the Healing Potion is the obvious choice to keep you healthy.

It should always be keeped in mind that your Double Bladed Staff is an energy-hungry beast. This means your time is limited once you have engaged your victim. In case your target is rotating through one defensive ability after another, make sure to manage your energy consumption. While fighting in an unscouted area, keep at least one of your movement skills or Ambush as a reserve. You never know if your victim has friends in the area and you want to make sure you can escape any possible counterattack.

Of course, there are many other setting choices with ganking. Anyway, this guide would help you for solo ganking in certain aspects. View the whole guide at the official site.
Posted by Unknown at 12:15 AM